Open Source Summit is the new name for LinuxCon/ContainerCon/etc. This was my first technical conference in Japan and possibly the first Open Source Summit ever. Future Open Source Summits will be held in North American and Europe later this year. This conference was apparently attended by over 1000 people, however it featured a small exhibition floor and was split across two floors of a building in Tokyo, Japan. This split led to it feeling like a lower attendance count for me.

Fedora was represented as part of a shared Red Hat communities booth. Our videos about Fedora Modularity and Diversity were playing in heavy rotation with a few other videos about Red Hat and other communities. I worked with local engineers to answer questions about Fedora and Modularity as they arose. We got some interest, however booth traffic in general was fairly light.

I think the primary reason for this was that other than the folks from SUSE, BlackDuck, and 1-2 others, every booth was focused on Automotive Linux. From a Fedora perspective, we don’t have much of an Automotive Linux story. We did talk a lot about Fedora Atomic, when people’s use cases made that appropriate. You could easily argue that automobiles are a special case of Internet of Things (IoT) which is well served by the OSTree technology built into Atomic Host.

A big take away for me was that we need to do a better job of figuring out how to grow our community in Japan. I had sent a general email to the ambassador list, but did not get a response from anyone in Japan. I did not follow up, like I should have, with direct mail to the ambassadors there, however it concerns me that email with Japan in the subject line was not answered. Assuming this conference remains on the list for next year, I will try to better engage with the local ambassador community. Anything we can do to use these kinds of conferences as leverage for growing our contributor base among working professionals is a good thing. This is especially true at a conference like this one where hardware drivers and other work may need to be done in Fedora to set it up for later inclusion in other Enterprise Linux distributions.

By sharing a booth with Red Hat we had no direct conference costs. Even the stickers we handed out were provided directly by Red Hat. This allowed us to participate in this conference without spending any Fedora public budget. 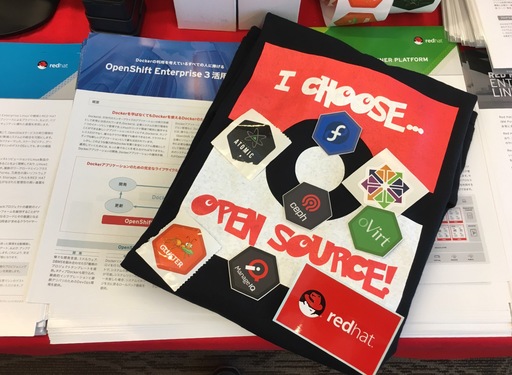 Srsly? I can’t even.