Ambassadors from six (or seven depending on how you count) countries came together in Cusco, Peru to discuss how to innovate in the LATAM community. Alex (alexove) coordinate the group and located a fantastic meeting space courtesy of Universidad Global. Organizing this FAD was hard work as plane tickets are difficult to arrange and frequently have large price swings in LATAM. It was worth it though as I think the FAD has some very real and practical outcomes. In attendance were 7 ambassadors and me as a representative from the council and to support the FAD. We were occasionally joined by additional ambassadors by phone and some student assistants. 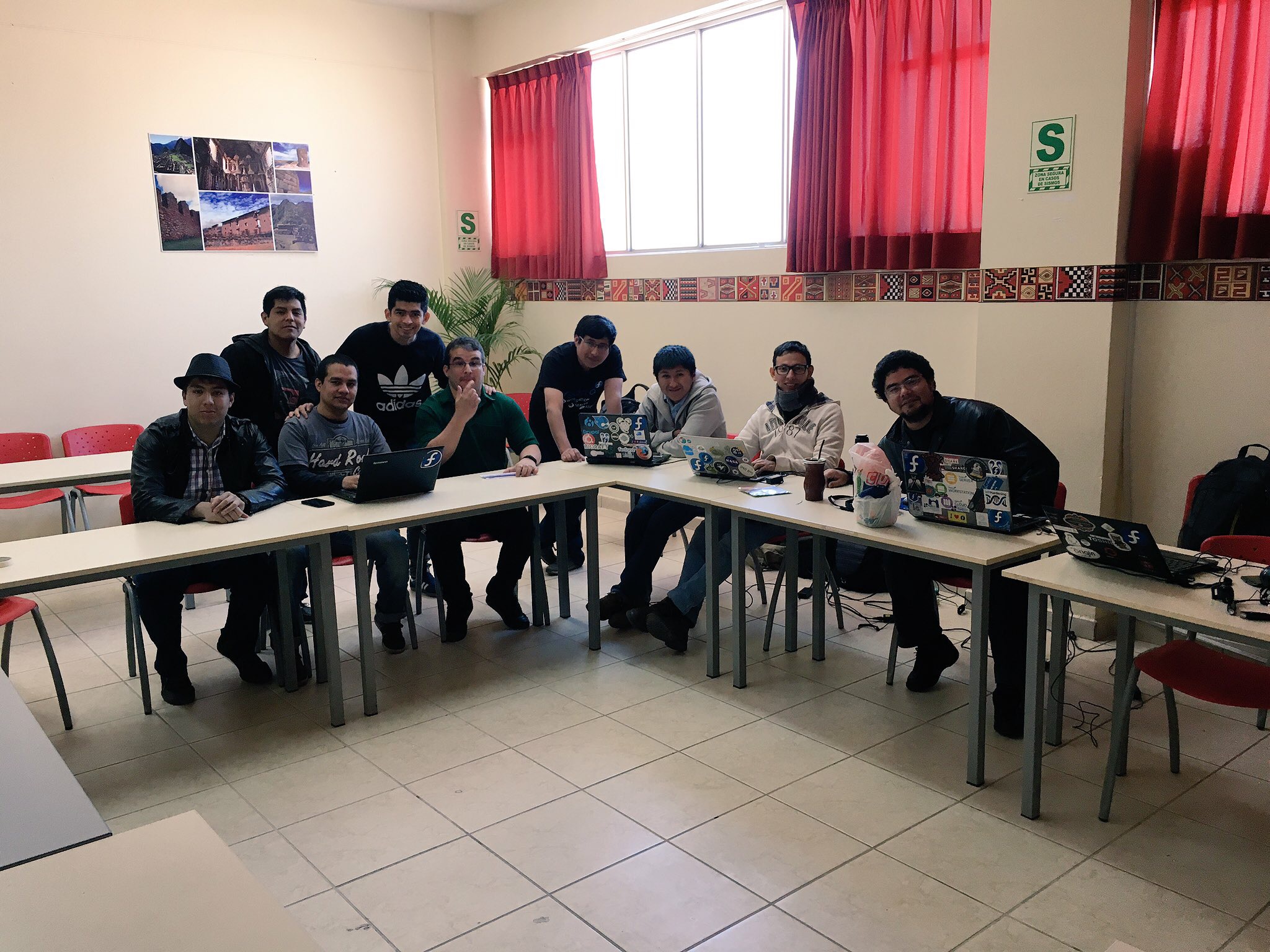 The LATAM Ambassadors and some student assistants hard at work on Day 1.

I am always impressed by the backgrounds and skills of our contributors. This group is no exception and was filled with students, system administrators, programmers and project managers working with a variety of environments and language stacks.

On the first day we were welcomed to the University by the Rector and other officials. Then we got down to work with a SWOT analysis of LATAM. We looked at the Strengths and Weaknesses of the region and our external Opportunities and Threats. This generated a great deal of information and a lot of it showed just how connected the LATAM Ambassadors consider their work with the rest of the project. Some (but not all!) of the SWOT output included:

Identifying and recognizing these items makes it easier to brainstorm ways to move the project and the community forward. For example, Day 2 featured a lot of discussion about how to breakdown the segregation that occurs when people are divided by language. Many members of the LATAM community are functionally fluent in English, especially in a technical context. A lot of our double systems, for example, having one ask.fedoraproject.org database for English and a separate one for Spanish forces the community members to actively choose which “community” to participate in. Participating in both is often a hassle and is easily forgotten. It is filled with friction. The Ambassadors have brainstormed some ideas about how to better integrate the LATAM community with the larger world-wide Fedora Community. I hope we will all see those proposed in the project soon.

A very productive discussion was held around event management and publicity. The team has come up with a simple 4x3 process (4 steps before an event and 3 steps afterward) that should improve quality, communications, accountability, and publicity for events in LATAM. I hope that other regions will look at it when it is published and offer suggestions and improvements. Some regions may even want to adopt it as it seems fairly complete.

One of my roles as the council representative was to answer questions about how budgeting works and to present the council’s goals and the new mission statement. In this area we have two major changes that need to be explained clearly. The first is how the new mission statement represents the goal for a lot (but not all) activity the project undertakes. For ambassadors this means that the council would like to see that most events support the goals of the mission statement. From a budget perspective the council is trying to accomplish two things with the new budget structure. First we are trying to eliminate the idea that we have to do certain things solely because they have been done in the past. We are at an point where we can safely evaluate all of our resource usage and make sure we aren’t on auto-pilot toward an outdated goal. Secondly, we are reserving some money for good ideas that can come from anywhere. What we have learned in the past was that it is hard to move money from a region that isn’t spending it but has it allocated to them to support an idea from another group. So we are asking the regions to request additional funds as they have new ideas. This way non-Ambassador groups in the project also have a pool of money they can make requests against. 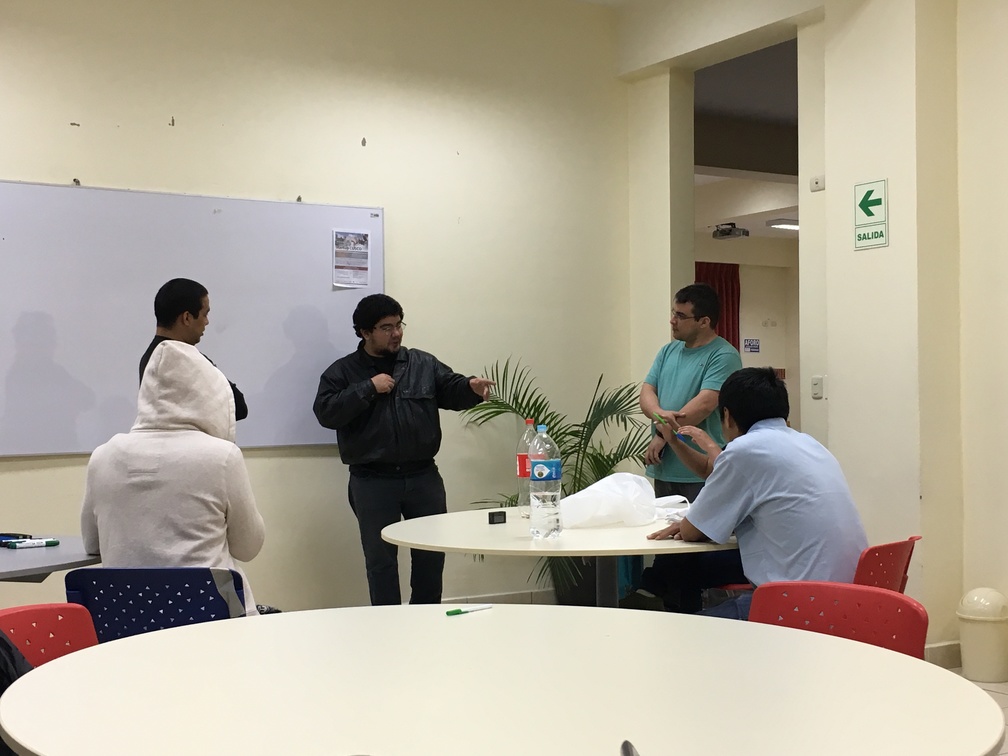 Stepping away from the laptops and using the whiteboard is a key productivity enhancer.

The LATAM team is very concerned about the state of documentation. I used some of my time sharing what has been going on in the docs project with them. Their ideas for how to energize contribution once we can work with topics has me very excited. There may also be some coding contributions coming out of LATAM to help make this all happen.

I also heavily participated in a conversation about swag. LATAM has not been able to centrally produce swag in the past which has led to shortages, reimbursement problems and quality issues. We have a framework to move forward with centralized production. It would be ideal to see LATAM and other regions work together on centralized production of swag as it will drive down prices for everyone. We can also leverage some Red Hat provided administrative resources to make distribution faster and easier. As LATAM starts works on their framework I hope other regions will join the conversation and work with them to make swag better for everyone.

For those who are wondering, the discussion for all days was a mix of Spanish and English with not everything being translated. As the only non-Spanish speaker this didn’t bother me. My job is to support the community by helping with information and administrative solutions. I followed most of the conversation and the group was fantastic about bringing me up to speed as they went. This allowed me to provide new ideas or offer my opinion and input.