Red Hat Summit is a huge conference with a large number of parallel tracks. This was my first Summit and I was sorry I didn’t get to do more. I can’t tell you much about the content as I only got to attend one session, the Fedora Birds-of-a-Feather (BoF) session. Lots of the sessions have been uploaded to the Red Hat Summit YouTube Channel, so I encourage you to visit it and look around.

The Fedora BoF was run by Adam Miller with assistance from other Fedorans present, in particular Matthew Miller (no relation) as needed. We had about 35-45 people in the room and the conversation was mostly focused on areas of interest to system administrators and operations based on the interests of the crowd. In particular we talked about: Fedora Modularity, Atomic Host, Factory 2.0 and CI/CD for the whole OS, Gnome now being shipped with Wayland as the default, Flatpack, Fedora on the Raspberry PI and other IoT devices, the ability to become a container maintainer, and how Fedora loves Python and Ansible. There was a lively conversation and frequent back-and-forth between the attendees as people discussed challenges and were generally sharing and being sociable. Adam is a great facilitator for these kinds of sessions and I hope I was able to emulate him at the BoF I helped with at LinuxCon China in Beijing.

Fedora was provided with a large booth in Community Central at the center of the trade show floor. We had a prime position with a pod that could accommodate 12-15 people and had a huge display TV. We played the Fedora Modularity demo videos along with the Fedora Diversity video. Both served as a great way to talk to people about the future of the operating system and how to join the Fedora community. Adam Samalik was in the booth as our Fedora Modularity expert and also presented at one of the stages on the trade show floor.

Many of our visitors were already familiar with Fedora either because they are active contributors or because of their work with Red Hat Enterprise Linux. I had an interesting conversation with a long time systems programmer, who, as she reaches the end of her career, is very interested in becoming a Fedora contributor in retirement. We shared a wall with the CentOS pod and were able to cross-refer visitors and talk to people about the whole enterprise Linux ecosystem.

Across from the Fedora booth, Aleph Objects had a small table to demo 3D printing. They had brought two printers with them, however both wouldn’t fit in their allocated space. In the spirit of community, we hosted one of the printers in our booth. It was a huge draw and led to lots of conversations about how to drive 3D printing with Fedora. I personally don’t have a lot of experience with 3D printing so it was fascinating to watch it up close and see the final output. Even the company that built the trade show floor was interested in using it for custom pieces for trade shows which led to a great Fedora+Lulzbot conversation.

Our other big display piece was a Raspberry Pi running Fedora Workstation. The power of community was on display here as we had a “patch” submitted and “merged” during the conference. Mo Duffy came by and saw the amateur backdrop I had put up on the display and went and created a professional image, and brought it in for us to use. It was fantastic to see the community come together like that. 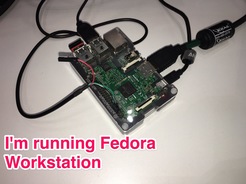 A quick hack to prove the concept becomes … 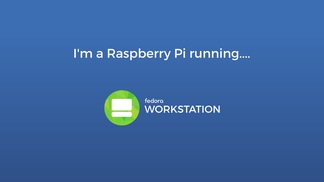 … a polished final product built by the power of community.

We didn’t hand out a lot of swag at the conference and confined ourselves to Fedora stickers. Matthew discovered some Fedora badge hangers in his backpack and we realized that we need to print those in future years to allow supporters to easily identify themselves during the conference. We specifically did not prepare Fedora DVDs and had only a few requests for media at all. One person wanted a DVD to do an install on the trade show floor of a failing demo machine that was actually old enough to have a DVD drive. The other requesters either were looking for free flash drives (for other reasons) or wanted a souvenir. We discussed printing either updated Fedora cheatcubes that could include the download URL or business cards to hand out with the download URL for future years.

It was great to be present at Red Hat Summit with the other Red Hat sponsored open source projects and communities. This event was made possible by Red Hat sponsorship and didn’t use any Fedora public funds.