Documentoring is a possibly made up word that defines how David approaches doing his job. It is about getting everyone you work with invested in quality products and quality docs.

During his career he has seen the ratio writers to engineers go from 1 writer to 10 engineers (and related fields) to 1 writer to 50 engineers. This has happened because of a lot of factors, including:

His role has also changed with a shifting the balance between “create” and “curate”. The volume of writing is now much lower as more content comes in from other sources. This means he is spending more time looking at things like automated builds, testing the docs, and single sourcing.

Being an effective curator can be more valuable than being a prolific creator.

This led him to the realization that the most effective person to write software documentation is usually the software engineer. The turnabout is that they are also the least appropriate person too write software documentation because they have other objectives and skill sets. This led to him wanting to convert the “you know all about this because you built it, tell me everything I need to know” conversation into a hand-off. 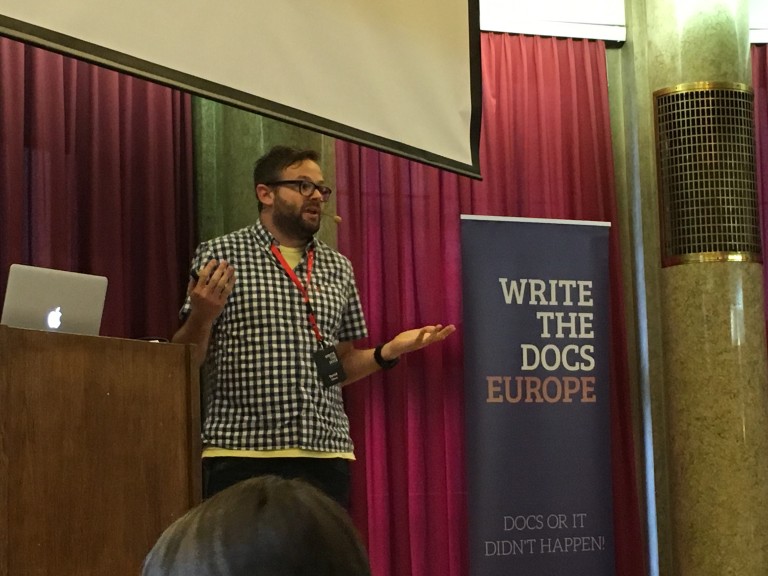 If you don’t have documentation you don’t have a product. As an example, he shared two stories. The first was of a great product with flawed docs. It was a cloud service that was to be deployed with a bunch of other services. They had a great product that met a lot of challenges but the docs were not cared for. These observations followed:

Story two was of the same product but in a local implementation. It was a flawed product with great docs. The flaws were because they were forcing a cloud product into a limited non-cloud format. The feedback was very different.

Give yourself the best chance to succeed

Use the kinds of products the engineers use. As they began using GitHub, Sphinx, different markups that weren’t XML, JIRA, etc., he made changes. This meant the writers could easily integrate with the engineering team, often early on in the development cycle.

Bringing these to bear has caused his team to realize the value of documentation and how they can have a direct impact on quality.

The most effective tool, however, has been empathy. Empathy with the user and the engineer. This is the best way to figure out what is needed and the best way to get the information.